The sad, desperate world of Clash of Clans 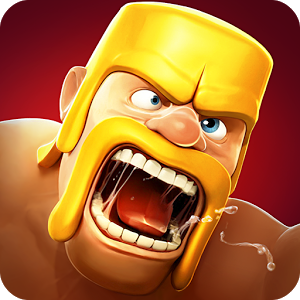 I'd seen the ads in the subway for some time prior to the baseball playoffs this fall.

The gentleman at the left was featured prominently in most of them: Gaze into my mustache and despair! read the caption on the poster.

Seriously? I admit I had to look it up in order to get the words right, but I at least remembered that this slogan was meant to evoke a famous poem. It's Ozymandias, by Percy Bysshe Shelley, in case you're at all curious: "My name is Ozymandias, King of Kings; / Look on my Works, ye Mighty, and despair!"

Then came the MLB playoffs and the commercials -- hundreds of them, thousands of them -- for this stupid game. I watched and I wondered: Who would be goofy enough to waste their time on nonsense like this?

At a family gathering I found out: My sons had all downloaded the game and were happily destroying each other's villages.

"Can't you peacefully coexist with your neighbors?" I asked. "Can't you grow and prosper by trade or diplomacy instead of warfare? Must everything end in violence?"

My kids regarded me with that pitying look reserved for hopeless cases. They hated the way I'd played the one computer game of theirs that I had attempted (a few different incarnations, over the years, of Sid Meier's Civilization) -- "your turns take 45 minutes," they'd complain, as I built railroads and cleared forests and negotiated trade routes. "No, Dad," they told me, "this is just kill or be killed."

It sounded awful... but the kids were clearly enjoying themselves. And I have this iPad at home and you can only play so much Sudoku or Solitaire and, well, one thing led to another. I downloaded Clash of Clans. 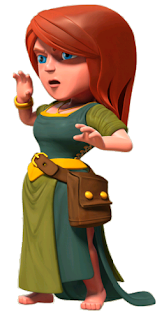 I liked building up my village. I liked clearing the obstacles and setting up my gold mines and building defensive walls. It's hard to build up quickly, because you have to carefully husband your resources. (Either that or spend real money to buy "gems" that can be used to spur production. Well, that wasn't going to happen in my case.)

Still, I started to feel a certain affinity for my villagers, all of whom, apparently, resemble the nice young lady at right who calls me "Chief."

At first, she offered helpful hints about what to build first and where to build.

But all too soon, her messages became darker: "While you were gone, our village was destroyed by MetalMan" -- and, sure enough, I could watch a "replay," starting with my villagers fleeing in terror to the village hall for protection while my cannons and archer towers spat death at my attackers, only to be overwhelmed by force and numbers. Then my mines were destroyed and the builder's huts and resource storage units and, finally, my poor village hall and all the poor creatures huddled within whom I had failed by not upgrading my walls from wood to stone.

But, somehow, all my villagers survived. "We must build up our defenses!" my villager told me, but with no seeming bitterness. If I were them, I'd get me a new Chief pronto, one who could keep the invaders at bay.

But my villagers are stuck with me.

And now I perceive the true horror of their plight. I upgraded the walls, I improved the cannons, I strengthened the archer towers, and still the invaders come as soon as I move onto something else (you know, like work?), and each invasion is more terrible than the last, the attackers always just a bit stronger than anything I'd prepared to repel them, overwhelming my defenses and destroying the town hall where the villagers tremble in fear.

And it never stops.

As soon as I come back, they are made whole again, ready to keep building as I direct even though they should be moving out in droves.

After the village is destroyed, there is a breathing space -- a shield is set up (no thanks to me) -- that keeps the villagers safe for 12 hours or even 16 depending on the extent of the carnage. My villagers are behind such a shield now. But I don't have enough gold to upgrade to level 4 walls -- and if and when I do, stronger armies will come to knock those walls down, too....

Am I taking this a little too seriously?
Posted by The Curmudgeon at 11:01 AM

Email ThisBlogThis!Share to TwitterShare to FacebookShare to Pinterest
Labels: Decline and Fall of Western Civilization, Just for giggles, The Sporting Life