You never know when that next wave of nostalgia will crash over you. Today it happened as I was reading an article in this month's Smithsonian, "How Lego Is Constructing the Next Generation of Engineers." 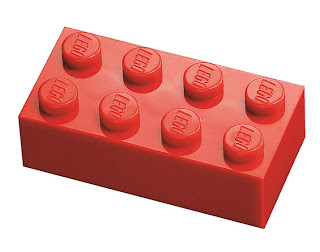 And I did. I built buildings to accompany the train setup, I built cities, I built ray-guns (I had a pretty good phaser design, if I do say so myself), I built control panels -- buttons on buttons -- to operate spaceships that would take me all around the Galaxy -- without ever leaving my parents' house.

I didn't play with Lego as often as the years went by, but (like the boy in Toy Story) I had occasional relapses for many years. Eventually, though, I went away to school and my mother gave my Lego collection (by then quite massive) to my aunt so that my 14-years-younger cousin could play with them. I thought I'd get them back for my own children, but that's not how it worked out: The whole box got sold in a garage sale at some point; I was not informed until well after the fact.

Still, by that time, I was married and looking forward to my own children and the chance to play with their Legos. We did fine with the Duplo blocks (Duplo being the giant Lego blocks that are made for little hands) and we built up quite a collection of these (which we absolutely refused to share so that my grandchildren will have them). But when the time came for my kids to graduate from Duplo to Lego, Lego wasn't the same.

When I was a kid, the idea behind Lego was that you could build anything you want. When my kids were little, the Lego philosophy had degenerated to 'you can build anything we want.'

There may always have been Lego models; I don't think so, though. I think somebody built the Empire State Building (I remember a huge Lego Empire State Building in the toy department at Marshall Fields one Christmas) or the Statue of Liberty from Legos without instructions. But, even if there were models, the big sellers were the boxes of bricks.

And those boxes of bricks didn't exist when my kids were little. I looked everywhere for them. There were only models. We have a green Lego Statue of Liberty in the dining room still, a little dusty, and with a few of the pieces missing after being jostled from time to time down through the years. My wife bought it for Oldest Son. I hated it. He loved it -- until he was done with it.

After he built it, what else was there to do with it? Admire it? For how long?

So we didn't get Lego Millennium Falcons or any of the other models.

Now I must admit to a certain prejudice against models. My father tried to interest me in model making -- a standard hobby for boys in the 20th Century -- and my father continued making lots of models, even later in life (a lot of them ones I hadn't already ruined). He had the fine motor skills and patience necessary to build models. He had hopes of capping off his model making career by building a ship in a bottle. He never quite got to it.

When I tried to make a model airplane, on the other hand, the wings wound up on the same side of the fuselage, or at least out of alignment, and I usually glued my fingers together. I was a disaster. If I was supposed to break off a plastic strut here, I inevitably broke it off there. There was no model so simple I couldn't screw it up. I learned to hate model making. (You lose a little skin off your fingers each time you pull the glue off.)

So my feelings about model making generally may have colored my feelings toward Lego models in particular. But, if so, I was not alone. As the Smithsonian article relates, Lego sales were in decline during the late 20th Century. By the early 2000s, Lego was on the verge of being bought out by Mattel.

I wasn't following Lego's decline; my kids were largely grown by this point and their Lego window had closed. But, if I had known of Lego's near demise, I might have smiled a smile of secret satisfaction. And then Lego found robots. And schools, even middle schools, found Legos to teach basic engineering principles by having robot competitions. The latest entry in Lego's robot reboot is Mindstorms EV3:

Mindstorms EV3 is a jumble of parts (nearly 600 separate elements) that can be plugged together many ways. The toy, which clocks in at $350 and will be in stores this fall, comes with 3-D interactive building instructions for 17 different bots that walk, talk and stalk. And, this being Lego, enterprising kids are encouraged to hack away and turn the components into whatever they can dream up.

Well, it's not exactly a box of bricks from which one can make anything yet... but it sure sounds like a giant step in the right direction. And, this time, the blocks can move.

It gives me something to look for at Christmastime when the grandkids start coming along in more quantity....
Posted by The Curmudgeon at 11:06 AM