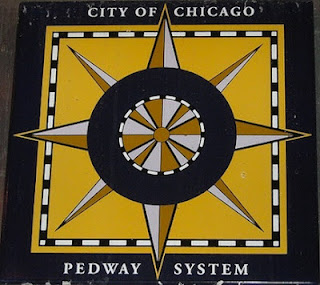 It's a nice day in Chicago today. The welcome rains of last night and this morning have subsided; the fairly thick cloud cover is punctured, here and there, by shafts of sunlight. The thought of getting out from behind my desk here at the Undisclosed Location, coupled with a pressing need for some office supplies, prompted me to take a lunchtime stroll.

I went above ground to the Staples at Washington and Wabash, and quickly discharged my errand.

But there were lots of folks today who must also have been itching for an opportunity to come out of the air conditioning and into the air and the sidewalks were crowded. I decided to go back via the Pedway.

The Chicago Pedway is not on the must-see list for Chicago tourists, nor should it be, not at this point. It's a way of getting from Point A to Point B, often a roundabout way, but for all that quicker, usually, than dealing with cars and stop lights and heavy pedestrian traffic. And it's dry when it's raining or snowing, warm enough in winter, and cool enough on even the hottest summer days.

Instead of heading back west, then, I walked over to Michigan Avenue and gawked at the tourists for a block or so before turning into what I guess is now called the Crain Communications Building at 150 N. Michigan Ave. In pictures of the Chicago skyline, taken from the lake and looking west, this is the white building that looks like some giant took a diagonal slice out of its side.

I could have gone straight back from there, I suppose, but I decided to go out to what I call the east end first.

At different times the Pedway network has been more extensive. After 9/11, for example, the skybridge over Madison Street between One and Three First National was removed. A mini-mall under the One North Dearborn Building provided another connection between the State Street and Dearborn Street subways. I could have sworn that it was once possible to walk from City Hall to Illinois Center, at Michigan and Wacker, without once stepping out of doors. In fact, I'm sure I've done it. But you can't do that now.

Still, there's some ground to cover. I doubled back from 150 N. Michigan underneath Randloph and then Michigan Avenues, through the Metra Electric Railroad Station (what us old-timers might remember better as the South Shore Station) and up into the Prudential Building. There's a spacious interior courtyard there, with some inviting seating areas in the middle, ringed by stores. The Pedway in the Aon Center, next on the tour, is a mini-mall, with lots of different restaurants for the office workers. There are also a couple of magazine stores and a post office.

The path leads next into the Fairmont Hotel. I don't know why, but the hotel smells like travel. I don't mean to suggest that the odor is offensive -- it isn't -- but it is distinct -- and it's the same smell in airports and hotels I've been in all around the country. Perhaps they all use the same carpet cleaner.

There's nowhere really for the Pedway to go past the hotel, but it does anyway, past the Lakeshore Athletic Club and all the way to the entrance of the garage of the Park Millennium Condo building. In between those two points of interest there is one more: Too wide for a hallway, it is really a spacious room, an underground ballroom.

Don't get me wrong. It's not fancy. There is drab carpet and utilitarian drywall and the constant sound of air handling equipment. But I've never seen another soul there -- and this is a trip I make at least a few times a month, just to shake off the cobwebs at work. On many prior trips I tried to figure out how I could commandeer that space for Younger Daughter's recent wedding reception. (Hey! I'd tell her when she screamed at me, how many brides get wedding receptions in downtown Chicago?) There are security cameras, though. I doubt that the fastest caterer could get set up before being challenged.

Still, that room's a continuing mystery to me. Surely someone must have had a different plan for this space, else why make it so big?

I got to think about these things all over again when I did the quick turnaround at the Park Millennium (my "east end").

Heading back, I turned left coming out of the Metra Electric Station and cut under the old main public library building (now the Chicago Cultural Center). Today, as on all days recently, a man was strumming a guitar, harmonica mounted on a chest harness, trying to fill the space with music. The Cultural Center links with a building at 139 N. Wabash which, in turn, links to the downtown Macy's -- Marshall Field's to us die-hards.

The Pedway here is a bit of a faded dowager -- well-intended, perhaps, wide, better decorated than most sections (you can see a section of this Pedway portion here) -- but the alcoves and columns often conceal homeless persons. Like the rest of us, the homeless also use the Pedway, and particularly this section, when it's cold, or too hot, or when it rains or snows. They weren't in evidence today -- I suppose the homeless folks must have wanted to get out and take the air, too. I can't help but think, when I wander through here, that this particular stretch could be put to better use. Tourists already shop at the Macy's that the Pedway winds around here; you'd think this stretch of walkway could be made a year-round tourist trap, too.

From Macy's we enter the Red Line subway station -- it used to be the Washington stop; for the foreseeable future, it will be the Lake Street stop. The station has been prettied up to the point where the change seems permanent.

The Pedway goes next under Block 37, the unromantically named shopping mall that occupies (what else?) Block 37 between State and Dearborn, Washington and Randolph, and then the Blue Line station (where the Washington stop is still Washington) and into the Daley Center. The Pedway passes under Clark Street next and into the County Building. The County Building and City Hall are two sides of the same building, really, east and west. You can turn north here and go back underground, past the Marriage Court and into the Thompson Building. You can if you want to, but I went straight through to LaSalle Street because I had to get back to work.

And I still do.
Posted by The Curmudgeon at 3:22 PM

Wow, being the cave lady that I am I think I want to come to Chicago just to tour the Pedway. Last time I was there we did all the regular stuff tourists do. Shopping, sears tower, a fantastic fair was going on downtown that weekend and it was a great time but I'm fascinated with this Pedway..lol

I seem to recollect that you could cover quite a bit of ground underground on the State Street Subway. The platform, with alternations for A and B trains, seemed pretty continuous from Lake to Van Buren.

And then there was the above ground pseudo-pedway. In bad weather you could stay under cover going through Field's, Carson's, Wiebolts, Goldblatt's and Sear's.

And in bad weather you could get from Wabash to State through the Palmer house and then dodge into the old Ward's store and then kitty corner into the old Federal Building.

You could, Andy K, and you still can -- but not as much. Block 37 is partially to blame. A "super station" was proposed for the Washington Street stop on the Red Line... and it never happened. And that led to the demise of the One North Dearborn connection, which connected to (if memory serves) Wiebolts. When the old Wards store came down another access was lost -- and, these days, you can't hardly get into the Federal building above ground, much less below....

You can still access the Illinois Center Segment section from the main section due to the Aqua building Pedway. Turn right at the intersection near the Aon Center (the left turn being the route to the athletic club). Go through the Fairmount and end up in the Aqua. You can then connect to the Swissotel, Hyatt Regency, Boulevard Towers and Illinois Center.

I'll have to try this.