Scroll down for Parts 1 and 2.

Having satisfied all demands, reasonable and otherwise, made by the IVF people, Older Daughter and Hank were finally admitted to the program. (Hank's parents had come through with large bundles of cash, something Long Suffering Spouse and I were unable to do.) Older Daughter was pumped full of hormones designed to stimulate egg production and she was somehow measured every day, or every other day at least, to determine how many eggs she'd produced.

Meantime, Older Daughter was laid low by a virus.

As a nurse in a children's hospital, Older Daughter is routinely exposed to any number of loathsome diseases. Put it this way: If I so much as drove past that hospital, I'd almost certainly come down with six different varieties of the creeping crud. But Older Daughter's resistance is usually pretty good -- one can't really function in that setting were it otherwise. Her coming down with a bug, I suppose, was evidence of the extraordinary stress she was under.

Naturally, the IVF people, having observed Older Daughter's shaky health, provided their own unique brand of comfort by threatening to suspend her treatments.

You see, you can't get pregnant if you are stressed or if you're not at the peak of physical condition.

This will come as news to many, I'm sure, many of these people being referred to more precisely as "mothers."

My wife could hear her screams and sobs without a telephone. And we're in Chicago. Older Daughter is in Indianapolis.

Having backed off that threat, for the moment, the IVF people then began to judge the quantity and quality of Older Daughter's eggs. There were four. No, there were 7. Or was it four after all? They're not growing fast enough. Not enough are growing. Let's increase the hormone levels, shall we?

Finally, it was decided that there were enough eggs, of sufficient size, to warrant their extraction.

Long Suffering Spouse tried to explain the procedure to me. After I revived from my faint, she tried again. Eventually, she gave up.

Older Daughter and her husband were deliriously happy.

The next question was whether they should wait three days or five days before implanting -- putting the now-fertilized eggs back. Meanwhile, the ova were cultured in a petri dish, waiting to see how they'd grow.

The theory is that, if waiting three days is good, waiting five days are better: The strongest candidates for implantation can be chosen and the best chance of producing a healthy child is achieved.

They decided to wait five days. That meant waiting until Friday for the big day.

In the meantime, three stopped growing.

But on Friday morning the two survivors, including one which had been the littlest of all when the process was begun, were returned.

It was decided that Long Suffering Spouse would go to her daughter's side for the weekend. She would cook. She would clean. She would see that Older Daughter stayed on the couch, as stationary as possible, because, you see, the fertilized egg can not attach to the uterine wall if one does not hold perfectly still.

It's a wonder anyone was ever born, isn't it?

I did not accompany Long Suffering Spouse on this mission of mercy. This was the weekend I moved my office. I really didn't have a choice: I had to be here, in Chicago, at the Undisclosed Location, trying to get set up. Younger Daughter therefore took my place. 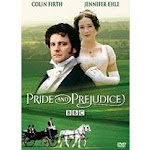 Thus, it was a road trip and a slumber party weekend. By way of illustration, Long Suffering Spouse took along the Colin Firth version of Pride and Prejudice.

if it'll help i'll add a prayer too curmy. sure hope this works...