I was walking with a colleague in the Loop yesterday afternoon. It was cool, it was damp, and my colleague (who did not have a raincoat or umbrella) was paying more attention to which buildings had overhangs than he was to the people in the street before him.

So he wasn't paying any attention to the drumbeats coming from the vicinity of LaSalle and Jackson. I gently suggested we might want to turn north on Clark rather than walk over there.

"What?" he said, momentarily taking his mind off the task of avoiding raindrops. "Why?"

"The Happy Radicals," I said. "It's not just Wall Street they're occupying; they're over on LaSalle Street, too."

"Oh, I suppose," he said, not particularly pleased at the prospect of standing still (and letting the rain hit him) waiting for the light to change.

It's not that I fully support the Occupy Wall Street crowd. Talk about 99% -- I'd be willing to bet that 99% of those drum-beating, sign-waving individuals don't agree with the positions espoused by the person standing next to them. There are unemployed persons, students, anarchists, unionists, environmentalists and (if you believe New York Mayor Michael Bloomberg) oversexed opportunists hoping to get lucky in those confused, but angry groups, parading now in our biggest cities' business districts.

Their anger is really all they have in common. They're not all agreed on who they should be angry with, much less what they should do about it.

A lot of them, though, seem to have some vague notion that banks are part of the problem.

And that's why I'd feel obliged to stay. I agree with that.

Break up the banks! 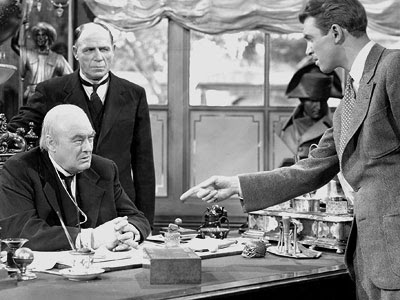 Banks are not just callous or arrogant or irresponsible or uncaring. They are also incredibly, breathtakingly stupid and incompetent. Just to cite one recent example from a story relayed to me by a real estate practitioner, how can a bank agree to a short sale, on the one hand -- and I don't mean in theory, I mean with a willing buyer, with money, and a closing date set in stone -- and still insist on proceeding with the foreclosure case?

In It's a Wonderful Life, Mr. Potter was the evil monopolist wannabe who owned the bank and bought up the department store and the bus company and every other business that tottered in Bedford Falls at the height of the Depression. But big as he was made out to be, and as powerful as he thought he was, Mr. Potter would not be a pimple on the backside of the Bank of America.

We need George Baileys, and lots of 'em, not Bank of America. We need someone who knows who his or her money has been lent to, and who can exercise some discretion when he knows that a customer is having difficulty. The sale of mortgages should be flat out prohibited. The person who makes the loan should have to live with the consequences. This would encourage a banker to make only responsible loans. A bank should be able to live comfortably, if not extravagantly, on the spread between the rate at which it loans money and the interest rate it pays to the depositors who provide the money to be lent.

The big banks need to be broken down into teensy weensy, itty bitty pieces. Oh sure, if the big players want to maintain their giant investment banks, so they can piss away billions in the stock markets and ruin small countries, we should let them... on one condition. They must get out of retail banking. Forever.

If the investment banks fail, they fail. No more bailouts. They won't be necessary, either, because Grandma's CD and Junior's college loan and your mortgage will not be bothered by the investment banks' rise and fall. The new banks should be prohibited by law from putting one red cent in one of the surviving super-ultra-mega investment banks. Anybody else stupid enough to invest with them should suffer the consequences.

In the recent economic unpleasantness, the giant banks, having created and fed the housing bubble, making and selling irresponsible, impossible loans, and then sucking the nation's economy right into the sewer, had to be bailed out by the U.S. government. And with that government money, the banks paid enormous bonuses to their wildest speculators, completely ignoring the people who had been plunged underwater in their suddenly supersized mortgages (except to foreclose on them). Most of the banks paid the government back, sure. But they paid the government back with money squeezed from thee and me with larger checking account fees and higher interest rates on credit cards. That slowed what little recovery there was. Bank of America now wants to impose a $5 monthly fee for people to use their debit cards.

But I'll stop ranting for now. I have this almost irresistible urge to make placards.
Posted by The Curmudgeon at 8:28 AM

a bit off topic, we were just talking yesterday about our bank. we are with the same bank for 32 years now. only we haven't. it has been "the mall bank", first national in palm beach, southeast bank, first union, and now it's wells fargo. in fact i believe there was another one in there somewhere that i forget. anyway, my point is we started with a little small town bank and through no fault of our own are now with some unknown face that i hate. buggers i say, just buggers. oh, and we still have the same account number!

I always wondered what happened to Mr Potter. He still carried on, plus he had that stolen money.

But people stay with the banks. They are outraged...and complain. But they don't transfer to a credit union...or even to another bank.

And the banks know it.