My posts this week might be seen as just a tad negative about the upcoming (onrushing?) holiday.

It's the stress of the season, I suppose. The Holidaze.

But I've kvetched about this before. Although the stores start putting Christmas merchandise out around Labor Day, and the radio starts spouting Christmas carols before the debris from Halloween is picked up, the so-called 12 days of Christmas have been condensed, as a practical matter, into about 12 hours -- from noon, roughly, on Christmas Eve until about noon on Christmas Day.

And, yet, isn't Christmas Day just the first day of Christmas? 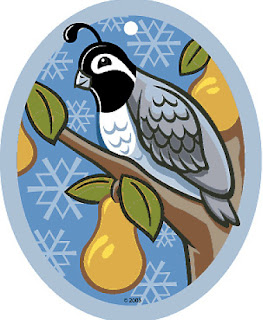 I tried to play the game once. I tried to do all the family obligations within the modern time provided. Once, mind you, just after I became a parent.

Won't you take my hand and let's journey into a Christmas Past? We are heading for Older Daughter's first Christmas -- 1984. My parents and my wife's parents were still living and in reasonably good health. My Just-Starting-to-Become Long Suffering Spouse and I just wanted to make everybody happy. And we thought that, with a little effort, we really could make everybody happy....

* shimmer * shimmer * shimmer *
We went to Nochebuena at my in-laws' home. We came home and wrapped more presents. We went to Midnight Mass. At the crack of dawn, we got up to start packing up my wife's 1978 Sunbird for the trip to Boondockia, the distant Chicago suburb where my parents lived. Maybe the Sunbird was a 1977 model. Either way, cars like that one gave Japan a huge leg up on the American auto market: One time, the driver's side door fell off.

I'm not sure how we got all of the baby's stuff into that little car: You know, the bags and diapers and bottles and blankets and toys and stuffed animals and more blankets and rubber pants and 16 changes of clothes (just in case). And more stuffed animals. The kid couldn't have weighed more than -- what? -- 20 pounds at 10 months, probably less. Yet there were at least 10 pounds of stuff that was absolutely necessary to bring for every ounce of that poor child. I don't remember trailing a U-Haul behind us, but, looking back, I have to wonder how else we could have brought everything.

(Did you ever notice how the volume of stuff that's absolutely necessary goes down with each successive child? By the time we got to Child #5 -- Youngest Son -- I think we just strapped him in the car seat and told him to hold it or suffer the consequences. That may be a slight exaggeration -- but only a slight one.)

Anyway, having risen with (or before) the Sun, and working diligently throughout, we were ready by sometime in the early afternoon to begin our journey. We even remembered to carefully bundle up the baby and get her into the car seat.

Although I grumbled about it, the trip to Boondockia wasn't that long -- an hour or so, and less with light traffic. Still, I always thought of my parents' house as so far away, it must be near the place where Christ lost His shoes. (My parents would later move even further away, just so I would understand the difference. Parents are always teaching.)

We arrived in time for a late afternoon dinner, even after unpacking. I can't remember now who was there besides my parents and siblings. One of my aunts and uncles probably. Everyone fussed over the baby, who became increasingly grumpy with each passing minute that she was taken out of her daily routine. My parents were not stupid: When Older Daughter grew too cranky, she'd be handed back to me or my wife. If we could calm her down, someone would take her back... and the cycle would begin anew.

Finally, dinner was done and we reloaded the car (I'll bet we didn't need more than 12 of those outfits) and headed back to the City. I remember clearly that we got home around 9:00pm. Now I was cranky. But, finally, we could have Christmas for our little family. The baby played with wrapping paper instead of the toys that Santa brought. I think I'd sold my pocket watch to buy a comb for Long Suffering Spouse; she'd cut off all her long hair and sold it to by me a watch fob... no, wait, that's a story by O Henry....

Come to think of it, I can't remember exactly what we did that night. I just remember being more tired than I could ever remember and vowing never, ever to try this again.