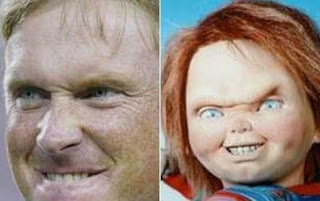 I haven't read any of the emails that cost Jon Gruden his job as Head Coach of the Las Vegas Raiders. I have seen some snippets in some published news accounts. Let us stipulate that they are as awful as they have been reported to be.

Gruden surely should have known better than to commit racist, homophobic, or misogynisitic slurs to paper or, in this case, email. He is old enough to know better -- 58, according to my quick research this morning -- and he was likewise an adult when he wrote the emails he is accused of writing. His case thus differs from other recent instances where young atheletes have faced condemnation for social media posts made in high school.

First takeaway: Never put anyting in writing that you wouldn't want read back at you from the pulpit of your church. I've tried to teach my kids this. I've tried to conduct myself this way, too. I'm certain that I have failed, from time to time, though hopefully less and less as the years have accumulated. Nobody's perfect.

During the Civil War Abraham Lincoln composed all sorts of vitriolic letters, often to generals in the field that he felt were lacking the proper resolve or spirit, and when he finished one of these, he would put it aside, in a drawer, for later consideration. Usually, the letters actually sent were toned down considerably.

In our modern, instant age, it is all too easy to lash out in anger. We don't even have to pause long enough to address an envelope or find a stamp. We can just press "send" and spew our vitriol out into the world at large. The temptation is grave enough in supposedly "private" communications, such as those in which Mr. Gruden apparently exchanged with Bruce Allen, the former president of what is now the Washington Football Team. (It was while sifting through Allen's old emails, as part of a broader investigation into allegations of misconduct concerning the Washington NFL franchise, that Gruden's emails were apparently uncovered.) The temptation to vomit unfiltered rage may be overwhelming when one is allowed to vent anonymously, as is so often the case on the Internet.

But we should hardly be surprised that Mr. Gruden had anger issues. (Imagine: A coach with a temper. Next you'll be telling me that there's an accountant out there who has an affinity for numbers.) Mr. Gruden, in particular, was renowned for his anger issues, made all the more marketable by his apparent resemblance to the Chucky character from a series of horror movies and television shows that I will never willingly watch.

Sometimes, when people blurt unthinkingly while angry, they will use slurs. As apparently was the case here, in at least one of the damning emails, Gruden used derogatory terms for a homosexual person to describe the Commissioner of the NFL. That does not mean that Mr. Gruden necessarily harbors a particular animus against the LGBTQ+ community, or that Gruden believes, or then believed, that the NFL Commissioner is in fact a member of that community. It does mean that, on one occasion when he pressed "send", Gruden was angry about something the Commissioner had said or done and could not come up with, and/or did not try to find, a better way to express that anger.

That doesn't make it "OK" to use those words. Or any of the other hurtful words Gruden is accused of using. That is why this is, at best, a half-hearted defense of Mr. Gruden.

Human beings are supposedly rational creatures. We are blessed with the power of speech. We have hundreds of thousands of words in the English language alone from which we can choose when we feel the need to express an opinion, positive or negative, about anything. We should always be able to find words to express ourselves without resorting to racial, homophobic, or misogynistic slurs.

I wonder how any of us would fare, including Mr. Gruden's new ardent detractors, were we subjected to the kind of scrutiny that Mr. Gruden has recently experienced.

I offer no opinion on whether Mr. Gruden should have been able to keep his job, despite the newly disclosed emails. He foreclosed further debate on that point by choosing to resign.

But, ultimately, I would hope that none of us, including Mr. Gruden, will be judged solely on what we said, or wrote, in a moment (or, apparently, in Mr. Gruden's case, several moments) of anger. Rather, I would hope that we are judged by those who know us, and see us, and live and work with us, on the totality of their observations of us.

In this harsh and unforgiving modern age, I realize that this is a big "ask." But I'm asking anyway.