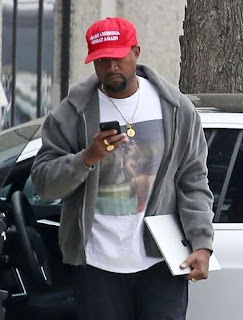 I certainly don't know Kanye West's music. I understand he recorded a track or two with Paul McCartney. I haven't heard them. And I guess Mr. West is married to a reality TV star who became famous for making a sex tape with someone who is not Kanye West.

But I do know Kanye West is from Chicago. He was just here yesterday, with Chance the Rapper, at a rally for longshot Chicago mayoral candidate Amara Enyia. Mr. West has contributed somewhere around $73,000 to her campaign.

And Amara Enyia is not Donald Trump supporter.

Mr. West, on the other hand, has been supportive of President Donald J. Trump. He's been warmly received in the Oval Office. He's been photographed, as shown here, wearing a MAGA hat. Why? I think I can explain. But you'll have to stay with me awhile.

Meanwhile, let's get this straight: I don't like President Trump. He is a bully and a boor and a loudmouth. When he speaks, I cringe. I can't understand how he got a single vote in the 2016 Republican primaries.

I'm not about to throw out the Electoral College or any other part of the Constitution simply because Donald Trump had the insane good fortune to run against Hillary Clinton. Who thought the election was a mere formality. Who assumed the Rust Belt and the Upper Midwest would vote for her without bothering to do anything to court their votes... oh, wait, she threw a concert in Ohio. LBJ was there. (No, not that LBJ, you old fogies, he's long dead -- you know, LBJ the basketball megastar.)

The one good thing about Trump that I can say is that -- since this is still America -- he will soon be gone. In January 2021, presumably. By no later than January 2025. We will outlast him.

And then the idiot tweets again.

So -- knowing, as you now do, how I feel about Mr. Trump, you will be unsurprised to learn that, this November, I will be voting for every damn Republican I can find. Not that I'll be able to find many on my Cook County ballot.

Oh... you are surprised?

But the explanation is simple: Like Kanye West, I am from Chicago.

I realize that, for most who happen upon this post, I will have to expand on this in order for you to understand. And that's what I will do in the post or posts to come.

Posted by The Curmudgeon at 9:32 AM

Well Curmy I don’t like him either but I do like the low unemployment and his trying to fight the border fiasco and lots of other things he’s done.

Nice to hear from you!