What happened to the necktie? 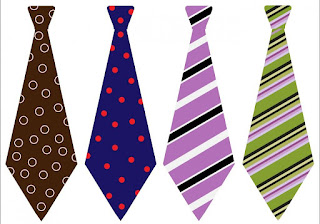 With Father's Day nearly upon us, this is not merely an idle question. The struggling retail industry would like an answer. Remember when a new tie was the quintessential Father's Day gift? Is this no longer the case?

Every day this week, as I've wandered around Chicago's Loop, I've taken time to notice whether men are wearing neckties.

A lot of them aren't.

That's particularly surprising in my little corner of the world. My Teeny Tiny Law Office is located in a building pretty much crawling with lawyers. I am three blocks from the Daley Center -- a primary county courthouse. There are lawyers everywhere around me, presumably, but very few of them are sporting ties.

Of course, I'm not wearing a tie today either. Truth to tell, I only wore a tie on Monday because I had to go to court. With the sole exception of one judge, since retired, I can't imagine a male lawyer deliberately going to court without a tie.

Of course, accidents do happen. I came to work once, some years ago, wearing a flannel shirt -- I think I was planning to move boxes or something -- only to realize, upon arriving at the office, that I'd forgotten a court date. Desperate, I scrounged a jacket from a colleague -- he was shorter than me, and thinner, so the jacket had no chance of buttoning and the sleeves came only about three quarters of the way down my arm -- but at least I didn't feel completely naked when I approached the bench. The judge -- with whom I'd been friendly when she was a privatus like me (we'd had some cases together) -- regarded me with exasperation: "Really, Curmudgeon? Flannel?"

But those kinds of accidents don't happen if one comes to work dressed in the uniform of the profession -- that is, wearing a jacket and tie. And it really was unusual for me to come downtown without both.

But that was then.

If this tieless look among professional men is a trend, and I think it is, what accounts for it?

I remember noticing years ago that Israeli politicians frequently sported an open-necked look. But I figured that was probably a consequence of the warm climate in that country. Who likes to wear a tie when it's hot out? But I only noticed the look because it was unusual. Out of the ordinary.

A few years back, I noticed that President Obama didn't always wear a tie, even while giving speeches. In the 2016 presidential primaries, it occurred to me that a lot of candidates were campaigning without neckties. I guess the idea was to appear more a 'Man of the People.'

Donald Trump, on the other hand, always seems to be wearing a necktie. Tied too long, but always on.

Oh, Lord, this can't be a political thing can it?

Please tell me that the disappearing necktie is an American phenomenon -- not just a Blue State thing....
Posted by The Curmudgeon at 8:44 AM

So glad you’re blogging again. I really enjoy your tales of family life.