NBC News anchor Brian Williams has been suspended without pay by NBC for six months because of the whoppers he's told about coming under fire in Iraq while riding in a helicopter. Twelve years ago.

Williams' story -- if not his actual helicopter -- had come under fire from various quarters for years, but the story unraveled completely only recently, when he repeated the account on the air, and all sorts of persons who had also been there that day came forward to refute it.

With this lie exposed, media vultures are now circling Williams' reports from New Orleans in the aftermath of Hurricane Katrina, where he reported seeing human corpses floating by in the flood waters.

Meanwhile, the Twitterverse erupted, predictably, with mockery, some of it quite funny (more here): 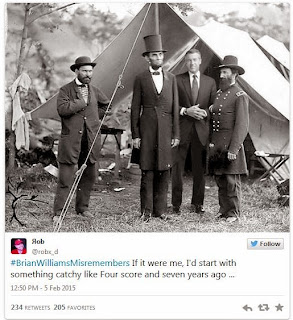 TV news anchors imagine themselves as journalists, not performers, and the public likes to think so, too. The suits at NBC had no choice but to punish Mr. Williams -- his self-announced 'stepping back' being clearly insufficient.

But the suits had a problem. Williams had decent ratings. High 'Q' scores. He could get all grim and somber reading the news and sparkle in late night TV talk show appearances. But even in a forgiving nation -- and we are -- NBC could not hope to reconstruct Williams' popularity and credibility without a seemingly severe punishment. And, so, six months.

Williams can go into seclusion, or therapy, or both. He can write a book about his personal struggle to confront the lies he's told in his life and his journey toward honesty. It could even be a true account.

Meanwhile, NBC will try out multiple replacements for Williams -- and watch the ratings. If, in six months, after a couple of network 'sweeps,' NBC News ratings are in the toilet, Williams will be offered a chance at redemption. If the ratings hold, however, watch for Brian Williams hawking product on a cable shopping channel near you. Only not toy helicopters. That will be in his contract.
Posted by The Curmudgeon at 9:07 AM

I am glad you are still at work in the blogosphere. Over here so called TV journalists are called 'newsreaders,' which seems a better description but, alas, does not ensure integrity.