On the passing of Larry Lujack 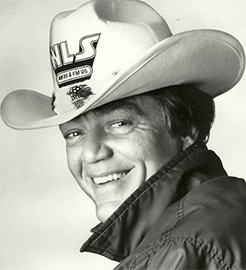 The passing of a radio DJ is seldom national news, and I was thinking that Larry Lujack's death yesterday from cancer at 73 probably wouldn't be.

But it is. No less than überblogger Ken Levine mourns the passage of the one, the only Superjock this morning.

I picked up my youngest son from college yesterday -- before the news of Lujack's death -- and somehow we got to talking about the passage of time. I think it was a sign advertising places in the high school class of 2018 (next fall's freshmen, believe it or not) that got Youngest Son going. "Can you believe it?" he asked. "2018 already?"

As bad as I felt at that moment, I felt much worse when Robert Feder broke the news about ol' Uncle Lar.

Uncle Lar was still Suprejock -- WCFL, the Voice of Labor, recast itself as "SuperCFL" in honor of their most valuable property -- when I was in high school. Superjock on WCFL and Bob Sirott on WLS were, if I recall correctly, the voices of afternoon drive 40 years ago and every new driver knew how to push the buttons on the AM radio to switch between 890 and 1000 without taking their eyes off the road. Button pushing might be prompted by a bad song -- there were some truly awful songs in heavy rotation on both stations 40 years ago -- or by "zit cream" commercials. But the "bits" between the songs were the really good stuff.

Sirott was the enfant terrible, the challenger. Lujack was the grizzled, bitter, burned-out veteran. His deep, deliberate, laconic delivery was unique, and seemingly entirely inappropriate to rock 'n' roll (Levine explains it better in his piece than I can but, then, he's a former DJ as well as a better writer). But whatever Lujack was doing, it worked for him.

A couple of years after I graduated high school, WCFL changed formats, going from Top 40 to elevator music. The station didn't fire Lujack, however, and he wouldn't quit. Here is how he announced the format switch.

Lujack would go back to WLS later -- his "Animal Stories" with "Little Snot-Nosed Tommy" Edwards are being remembered a lot this morning. I tuned in for them, too, even after I'd otherwise grown out of the Top 40 format.

All too soon, however, in 1987, Lujack retired, moving out west eventually. Except for a six month stint on FM and a reunion with Edwards that lasted a few years on what wasn't much more than a 10-watt AM station in the early 2000s, Lujack stayed retired. But he stayed with us, too.

Nine or 10 years ago, on the occasion of the 100th anniversary of our parish, I was asked to do the voiceover for the commemorative video. The parish hired a real filmmaker and everything -- her brother has directed several popular Disney features -- and she booked some studio time for me to come in and read the script.

This was the first time I'd been in a real studio, with a professional microphone and headphones and all the knobs and dials I was told not to touch on pain of death. But when we were doing sound checks, I did my best Larry Lujack imitation. It was, presumably, an awful imitation. But imitation, even awful imitation, is the most sincere form of flattery.