True confessions: This morning, I was "that guy" 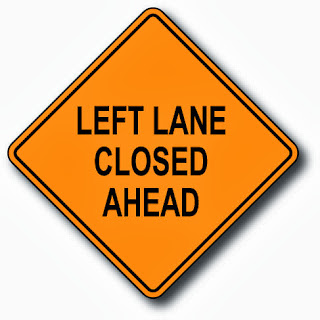 You know, when you're driving, and the sign says left lane closed ahead? You can count on "that guy" staying in the left lane -- maybe even moving into it because "that guy" is sooooooooo much more important than you are. As "that guy" passes you, you say something like, "That guy thinks he can just zoom past everyone waiting in line and cut right in -- the #$%@!!"

Well... this morning... not too far from my house... after dropping Long Suffering Spouse off at school, I had to head for the Kennedy, planning to jump on the Tollway and head out to court in Geneva.

It's a hike, but I had plenty of time... I thought. I knew there was construction at Cumberland and Higgins. They're rebuilding Cumberland where it crosses the Kennedy and there have been various lane closures in the vicinity -- and consequently slowed traffic -- on the few recent occasions I've had to head that way. I had to turn left from Higgins onto Cumberland.

So, yes, the sign said left lane closed ahead, but I figured, well, that must be the left lane, not the left turn lane. People still have to turn left. The sign doesn't say road closed or detour.

So I stayed in the left lane. I figured that this was the way to get to the left turn lane.

I was absolutely, totally wrong.

It took me 35 minutes -- by the dashboard clock -- to go about one-half mile.

So I was punished for my foolishness -- and I was late to court besides. But, punished or not, today, I was "that guy." I'm truly sorry.
Posted by The Curmudgeon at 1:23 PM

Confession is good for the soul. So it coffee!