The nation remembers a "dream;" Curmudgeon watches a nightmare 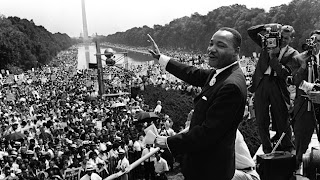 Yesterday the nation remembered the 50th anniversary of the March on Washington, the occasion on which Dr. Martin Luther King, Jr. delivered his memorable "I Have A Dream" speech.

Anniversaries provide opportunities to measure, to assess, to evaluate. How have we progressed, or failed to progress, in the area of civil rights?

But I went to a deposition yesterday afternoon and encountered a world so alien from my own, and so very different from the promise and the progress shown yesterday on the National Mall that I am compelled to write about it this morning.

I can't tell you details of the case, of course, but our deponent yesterday was a 19-year old African-American woman. Pretty. Soft-spoken.

She dropped out of her Chicago Public High School in the middle of her 10th grade year, three years ago. Since then, according to her testimony, she has held exactly one paying job, lasting for about three months, earlier this year.

Her "best friend" is now in jail on account of a fatal accident. Our witness yesterday and her BFF (also a young African-American woman) were with an older man -- he's in his mid 50s -- at the time. Both our witness and her BFF had a sexual relationship with the older man. The young woman yesterday insisted that she "was sexual" with this man only on the first day she met him. (She would have been 17 at the time, just like her BFF.) Her BFF had "intercourse" with him, but it was not a relationship. The older man installed our witness's friend in an apartment; our witness stayed over four or five times a week. The older man stayed over, too, two or three times a week.

No, our witness said, the older man did not pay her and her friend for things they did (allegedly, they sometimes helped clean the building where the BFF was staying and another one that the man appeared to own). But the older man would take them shopping, buy them clothes, take them out to eat.

The older man had a number of young girlfriends. Sometimes our witness would hang out ("just kickin' it") with her BFF and some of these other girls. Once, after the BFF got into trouble, our witness went to a wedding reception with the older man -- and two other young women. They all stayed together in the same hotel room.

He bought them marijuana. Our witness yesterday had a lot to say about getting "fried" and how a high progresses; she and her BFF often smoked marijuana with the older man.

She stated that she stayed friendly with this older man because he was so good to her and her family, "a big help."

I could go on, but I might stray too close to the relevant facts of the case or inadvertently supply potentially identifying information. Suffice to say, I was cringing, even queasy, when left the other attorney's office yesterday afternoon.

The thousands who marched on Washington in 1963 wanted to make freedom ring for all Americans. I saw yesterday how some Americans are using that freedom.

I might feel better if I could believe that I have only stumbled on an isolated instance, that there are very few people who are living life this way. But I don't think I can believe that.
Posted by The Curmudgeon at 9:03 AM

Email ThisBlogThis!Share to TwitterShare to FacebookShare to Pinterest
Labels: Decline and Fall of Western Civilization, Legal

Sadly, I fear that you are right.